Reflexology has been in existence for thousands of years. There are paintings in the Physician’s Tomb in Saqqara, Egypt dating back to 2330BC. They depict people receiving hand and foot massages. Similar practices have been documented in the histories of China and India.

Reflexology was introduced to the United States by William Fitzgerald in 1913 and who was named the modern-day pioneer, in the early 20th century he created  a technique focussing on ‘zone analgesia’. He was known as the ‘father’ of Reflexology.

Eunice Ingham, modernised reflexology and went on to create Zone therapy in the 1930’s and wrote various books including; ‘Stories that Feet Can Tell’; ‘Stories that Feet have Told’. She was known as the ‘mother’ of Reflexology, and has made reflexology what it is today. By illustrating all the reflexes on feet – mirror image of all organs, glands & parts belonging to body.  She went on to highlight that when the body part experiences a problem, corresponding reflexes in feet will reveal sensitivity when pressure is applied. Then by applying a deep, alternating pressure, a stimulating effect occurs distributed to the ‘zones’ of the body.

Reflexology is a Complementary Therapy that works on the feet or hands enabling the body to heal itself.  It is a form of massage which applies pressure to certain parts of the feet in order to promote relaxation, maintaining the body’s natural equilibrium and encourage healing elsewhere in the body.

Below is an example of a reflexology foot chart which illustrates where certain parts of the body are located on the feet. 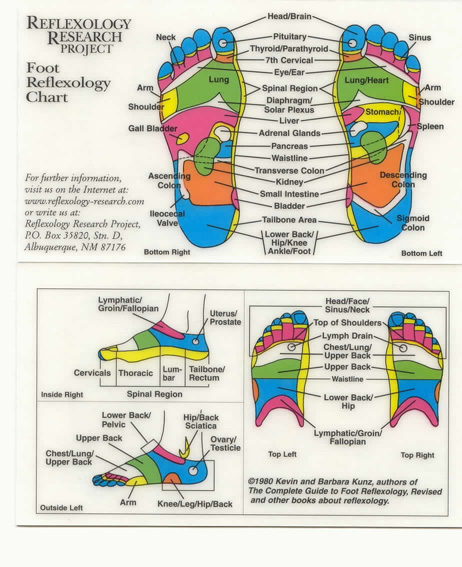 There are some suggestions that reflexology may aid :

To make an appointment or discuss treatments call or text Sonia on 07771 562491 or email info@bliss-therapies.co.uk

map of where to find Bliss Therapies.

Page load link
We use cookies on our website to give you the most relevant experience by remembering your preferences and repeat visits. By clicking “Accept All”, you consent to the use of ALL the cookies. However, you may visit "Cookie Settings" to provide a controlled consent.
Cookie SettingsAccept All
Manage consent

This website uses cookies to improve your experience while you navigate through the website. Out of these, the cookies that are categorized as necessary are stored on your browser as they are essential for the working of basic functionalities of the website. We also use third-party cookies that help us analyze and understand how you use this website. These cookies will be stored in your browser only with your consent. You also have the option to opt-out of these cookies. But opting out of some of these cookies may affect your browsing experience.
Necessary Always Enabled
Necessary cookies are absolutely essential for the website to function properly. These cookies ensure basic functionalities and security features of the website, anonymously.
Functional
Functional cookies help to perform certain functionalities like sharing the content of the website on social media platforms, collect feedbacks, and other third-party features.
Performance
Performance cookies are used to understand and analyze the key performance indexes of the website which helps in delivering a better user experience for the visitors.
Analytics
Analytical cookies are used to understand how visitors interact with the website. These cookies help provide information on metrics the number of visitors, bounce rate, traffic source, etc.
Advertisement
Advertisement cookies are used to provide visitors with relevant ads and marketing campaigns. These cookies track visitors across websites and collect information to provide customized ads.
Others
Other uncategorized cookies are those that are being analyzed and have not been classified into a category as yet.
SAVE & ACCEPT
Powered by